A most pleasant early morning autumn chore is the daily ‘orchard patrol’. With harvesting bags on our shoulders, we walk around the orchard as soon as the fruit begins to ripen. Generally when the fruit is ripe, and therefore fuller in flavour, it begins to drop (the seeds will also be dark). The apples are then picked, or shaken from larger trees where they fall onto the cut grass. This is the first point at which we can discard any imperfect fruit (left to rot under the trees as a natural fertiliser and food for the wildlife). The apples are then placed into crates and taken to the top of the orchard – where we have a little wooden processing shed. 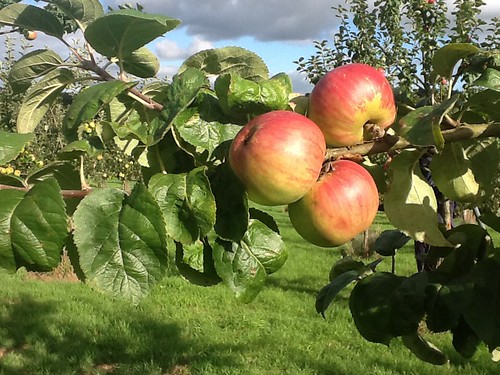 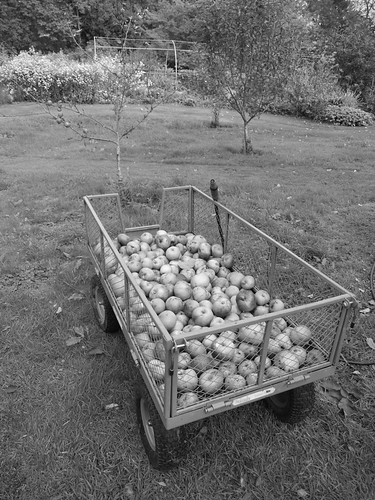 Once we have harvested the apples and sorted them by variety into crates, we wash them and load them by hand into the electric mill (which allows another chance to chuck out any imperfect fruit).

We then tip the pulp, or ‘pomace’, straight into our hydro-press, a device normally associated with wine-making. Compared to a traditional mechanical press, the yields are a little lower but its gentle action optimises the flavour of the juice. A rubber bladder is gradually filled with water, squeezing the pomace against a perforated stainless steel drum. As the pressure increases the juices flow. Children mysteriously reappear at this point in the process, ‘helping’ to sample this particular blend of apples for the first time.

We sieve the pale golden juice into a holding tank (unless we’re making a batch of cider vinegar, see below), adding a tiny quantity of vitamin C. Known as the Pedersen process after its inventor, this procedure allows certain oxidation reactions which enhance the fresh ‘just picked’ flavour, but prevents browning of tannins and excessive sedimentation. We then promptly bottle the juice by hand, and pasteurise each bottle in a hot water bath. This ‘sets’ the pectin cloud and extends the shelf life from a few days to a few years without impairing the flavour.

We use the traditional Orleans or barrel process to make our raw apple cider vinegar slowly, the old-fashioned way. The freshly pressed apple juice is pumped straight into 220 litre barrels, where it is allowed to ferment into a dry cider over the Autumn and Winter.  When warmer Spring weather arrives, and all the natural sugar in the apple juice has converted into alcohol, the cider is transferred into barrels which already contain a residue of vinegar ‘mother’ from the previous year’s batch. Vinegar ‘mother’ is the special bacteria that slowly converts the cider’s alcohol into acetic acid in the presence of air. Over the Spring and Summer months the cider is left alone to gradually turn into vinegar at a rate of about 1% alcohol to 1% acetic acid per week (industrial-scale vinegar producers use forced aeration to complete the process in a matter of hours). By the end of the summer our raw apple cider vinegar is ready for bottling – with mother – straight from the barrel.